What a Technician is required to know about Fuel Rail Pressure Control on a Common Rail Diesel (CRD).

Maintaining the correct fuel pressure under all driving and load conditions is a requirement for the efficient operation on a Common Rail Diesel (CRD). An ECU operated suction control valve (SCV) or fuel metering control valve (FMCV) located on the back of the high-pressure supply pump is utilised for this purpose.

Both these valves control rail pressure by regulating the amount of fuel supplied to the main supply pump – “pumping elements”
which controls the output volume and pressure in the fuel rail.

Excess wear, contaminated fuel or an electrical malfunction with the SCV or FMCV can create major driveability problems and possible no start condition.

Generally, the SCV is available as a replacement unit for a range of CRD supply pumps.

NOTE:
Many of these units may look similar but vary internally BOTH mechanically and electrically. It is important to fit the correct valve for efficient operation. 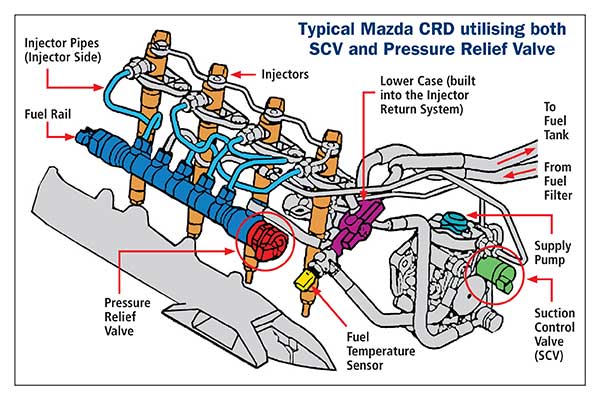 The SCV may be classified as a normally open or normally closed operating unit. It is important to realise that disconnecting the harness connector on one type will create a totally different result to the other type.

This operation can assist the technician when it comes to diagnostic procedures when rail pressures are suspected of being incorrect.

The ECU will generally operate the SCV by PWM to control the rail pressure as required for the driving and load conditions. This pressure is monitored by the fuel rail pressure sensor to ensure suitability.

When you supply and fit products from Premier Auto Trade you can expect a product designed and tested to the vehicle manufacturer’s specifications offering OE form, fit and function. Premier Auto Trade distributes products throughout Australia via a network of specialised resellers and leading automotive groups.